New Orleans: Murder on the Levee?

When the Union Fleet of warships arrived in New Orleans on a rainy Friday in April 1862, gunfire broke out in the 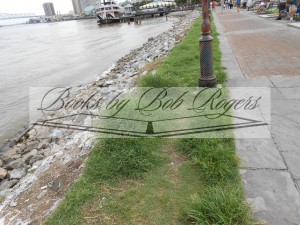 crowd watching from atop the East Bank levee along the Mississippi River.  A banker died.  Was the gunfire a protest against anyone so bold as to cheer the arrival of the hated Yankees?  Or, was it murder concealed within a diversion?

A Black and White Spy is the working title of a new espionage novel (coming February 2014) set in 1862 New Orleans.  The hero in this sleuth and Detective Lieutenant Culombo-like thriller is native New Orleanian Francesca Dumas, who first appeared in the novel First Dark: A Buffalo Soldier’s Story.

Selected New Orleans scenes in A Black and White Spy.

Comments Off on New Orleans: Murder on the Levee?