You are here: Home / Portfolio / First Dark: A Buffalo Soldier’s Story
In “the city that reads,” where Ravens are heroes and the rage, a Baltimore Post-Examiner headline declared: “Gripping Saga of Isaac Rice, a Runaway Slave, is a Hero’s Journey. [Don’t] be surprised if First Dark ends up as a popular movie.”

Imagine riding along a bucolic dirt road on a pleasant spring morning with birds singing among the budding trees.  Then the peace is shattered by rifle fire.  With that opening, Bob Rogers had my full attention and drew me into the lives of nineteenth-century families whose stories he used in First Dark as a contribution to the discussion Americans are having today about how things got this way in our country.  After reading the last line in First Dark, the struggles of lead character Isaac Rice and his young contemporaries continued to fill my mind with questions about our troubled national past and its effect on the future of our country. Opening paragraph from Foreword by Lloyd W. “Fig” Newton, General (Ret.), USAF

“An ambitious and lush tale set during the Civil War and Reconstruction.” — Kirkus Reviews

Isaac Rice, a teenager on a South Carolina rice plantation, traveling alone, follows a treacherous route filled with incredible hardships and danger to escape from slavery.  Too young to be a soldier, the Union Army hires him to shovel coal on a 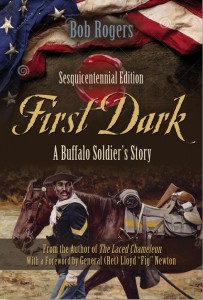 gunboat.  Thus begins Isaac’s westward journey, in which he encounters storms, stampeding buffalo, and the hate of zealous patriots whose causes are antithetical to the nation he is sworn to defend.  Undaunted, he pursues respect and dignity on an odyssey from the middle of the Civil War in South Carolina’s Low Country and the Mississippi Heartland, to the Indian Wars on the Great Plains and deserts of Texas, New Mexico, and Mexico.

Isaac’s is an historically correct epic tale of young North Americans coming of age amid the violence of the U.S. Civil War, Indian Wars, Reconstruction, and spillover bloodshed from a Mexican Revolution.  Telling Isaac’s story required extensive research of 19th and 20th-century books, official documents, and letters, plus multiple visits to relevant geographic locations over a period of twenty years.

A memorable set of characters revolve around Isaac  – a Confederate guerrilla, a black female activist in a Mississippi Constitutional Convention, a Mescalero Apache warrior, a white Union cavalry sergeant, and a Mexican nurse – who raise their voices and bare their souls as the world they seek constantly changes, bringing tragedy to their lives and danger for Isaac.

ISAAC RICE is an enslaved sixteen-year-old blacksmith apprentice on a prosperous South Carolina rice plantation along the South Edisto River.  Bianca, a twenty-three-year-old widow, chooses the handsome and strong Isaac to be her mate.  In early 1863, two years into the Civil War, Isaac, fed up with the news of Confederate victories, decides to run away and become a Union soldier.  After the war, he joins the new black Tenth U.S. Cavalry – its soldiers are later called Buffalo Soldiers.

RACHEL BLACK is enslaved on the Bender Plantation in Jasper County, Mississippi where cotton is the major crop.  The five-foot-tall dark-skinned brown-eyed beauty weighs one hundred one and is seventeen years old. She is secretly taught arithmetic and reading as a child by the plantation owner’s daughter playing school.  After the war, Rachel, Isaac’s betrothed, participates in Mississippi’s 1868 Constitutional Convention.

WILLIAM DUKE joins the Thirty-eighth Mississippi Volunteer Infantry Regiment and sees action at Corinth and Vicksburg.  After the Confederate surrender of Vicksburg, Billy forms a band of guerillas that raid Union outposts and Freedmen’s farms in West Central Mississippi until the end of the war.  Billy is an avid fan and disciple of Confederate Vice President Alexander Stephens.  Billy’s Avengers participate in the white voter revolt of 1875.

ORTEGA, a skinny sixteen-year-old Mescalero Apache, fears that his people will settle down and become farmers before he can become a warrior.  Eager to join chiefs who are willing to fight the white eye invaders, he bands with the aging famous Chief Cochise and is disappointed when Cochise makes peace.  Ortega and his best friend, Jorge, then join the Chihenne Chief Victorio to fight the white eyes again.

JAMES DARBY is the son of an English immigrant farmer in Illinois when the Civil War starts.  An expert horseman and Union cavalryman, James is captured during a raid in southern Mississippi.  After parole from a Confederate prison in Virginia, he fights again as a cavalryman at Appomattox Court House.  After the war, James serves with the Fourth U.S. Cavalry in the West where he joins forces with Isaac.

ALEJANDRA LUNA plows and plants with her father, a poor sharecropper, in the Mexican state of Chihuahua.  Alejandra’s brothers beat her rich unwanted suitor.  Fleeing from certain retribution, she and her older brother escape to the south and a new life starts for Alejandra when she is adopted by a physician and his wife.  A few years later, she becomes an accomplished nurse and midwife.