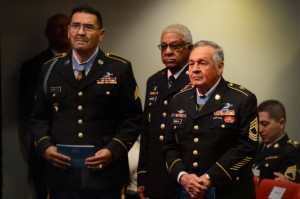 WASHINGTON (Army News Service, March 19, 2014) — The newest Medal of Honor recipients — 24 veterans who received the honor decades after their extraordinary heroism in three wars — have been inducted into the Pentagon Hall of Heroes.

The veterans from World War II, the Korean War, and the Vietnam War were honored at a ceremony at the Pentagon, today, one day after receiving the nation’s highest award for valor in a White House ceremony.

“We are here this morning to celebrate the heroism of 24 selfless individuals — 24 Soldiers whose acts of gallantry in battle merit our highest recognition,” said Secretary of Defense Chuck Hagel at the event in the Pentagon auditorium.

“We are also here to correct an injustice of history — to help right 24 wrongs that should have never occurred,” he said.

More than a decade ago, Congress mandated a review of Distinguished Service Cross awards to ensure that heroism wasn’t overlooked due to prejudice or discrimination.

During that review, the 24 Soldiers — who are Hispanic, Jewish, and African-American — were identified as deserving the medal.

Comments Off on 3 of 24 Heroes