Bob Rogers, author of the historical novel Will and Dena, was an IBMer for thirty-three years, and is the founder of Global Medical Data in Charlotte, NC. He is a former army captain, Vietnam War veteran, and was a charter member of Baltimore, MD’s chapter of the 9th and 10th (Horse) Cavalry Association. Bob lives in Charlotte.

BSS:  Welcome, Bob.  Of course, there’s always interest here in talking to historical novelists – especially about Buffalo Soldiers. To start out, what is the historical setting of First Dark: A Buffalo Soldier’s Story and the time period it spans?

Bob: Thanks, BSS. It’s my pleasure to visit with you.

First Dark: A Buffalo Soldier’s Story begins in the spring of 1863, near the middle of the American Civil War on a rice plantation, not far from Charleston, South Carolina.  After a brief sojourn at the plantation, First Dark follows our hero, Isaac Rice, as he makes his escape.  Geographically, the reader is taken on a voyage via the Atlantic Ocean and the Gulf of Mexico to Mississippi and onward to Missouri, Kansas, Indian Territory (Oklahoma), Texas, New Mexico, Chihuahua, Sonora, and Veracruz.  By the time the reader reaches Veracruz with Isaac in 1882, the Civil War was long over, Reconstruction had ended, two revolutions had occurred in Mexico, and America’s Indian Wars were near closing stages.

BSS:  Please tell our readers about yourself.

Bob:  I was born and raised in Spartanburg, South Carolina.  While growing up, one of my favorite things to do, when my uncles and older cousins gathered in the 1950s, was to eavesdrop on their stories about World War II and the Korean War.  Those stories drove me to study history with passion.  However, none of my secondary school or college history books mentioned Buffalo Soldiers.

During the fifties, my heroes were Uncle Homer (a WWI veteran), Uncle Will (a WWII veteran and baseball player), Don Newcombe, and Albert Einstein.

One hundred and one years after Congress authorized, in 1866, army regiments of Colored troops, I reported for duty in A Troop, 1st Squadron, 10th Cavalry, 4th Infantry Division at Pleiku, Republic of South Vietnam.  The same day in March 1967, I first learned of the Buffalo Soldiers.

Bob:  I write historical novels and speak to bring attention to unsung heroes and remembrance of the examples they left for us.  My main characters are ordinary men and women living life as best they can, but when circumstances made demands, they performed extraordinary deeds.

BSS:  What motivates you to write?

In a word, it’s remembrance.  I hope my novels will entertain and inform this and future generations of our past.  I hope my descendents and their peers, for years to come, will discover that we had ancestors who, with meager means, established thriving businesses.

My protagonists are soldiers, or former soldiers, who fought in America’s wars.  While in the army, my First Dark characters and their comrades built forts, roads, and telegraph lines.  While they labored and protected pioneering settlers, Indians, railroad crews, stagecoaches, and overland freight caravans, these soldiers, newly freed men, discussed women, baseball, gambling, and their few career alternatives.  They examined the role models of the day, which, once slaves themselves, had become successful entrepreneurs.

BSS:  What is the message in First Dark: A Buffalo Soldier’s Story?

Bob:  The first message is that war is futile and mankind’s biggest failure; that love and hate are omnipresent.  The second message is, no matter how dark our past may seem to have been, there is wisdom to be had from remembrance and observation of our forebearers that we can use today – especially from past entrepreneurs.

BSS:  What books or authors have influenced your life and writing?

Bob:  Herman Wouk is my favorite writer of historical fiction.  His thoroughly researched novels about World War II were very entertaining with compelling human drama while getting the facts right as he told the story of the war along side the drama.  His novels have set high standards for me.

BSS:  Did you learn anything from writing First Dark; if yes, what was it?

On a serious note, yes I learned more than I can tell you.  There are 112 entries in my First Dark bibliography, which does not include interviews, maps, or the several trips I made to most of the places and battle sites where my characters lived and fought.  I discovered many people of whom I had never heard – dead and living.

One my favorite two discoveries was locating the birthplace of a fictional character to be nearly exactly as I had imagined it – the village of Carrizal in Mexico.

The other was learning about the actual life of a former Kentucky slave, Hiram Young, who became a very successful entrepreneur.

BSS:  By the way, are you an entrepreneur?

Bob:  Yes.  First, I was an “intra-preneur” at IBM; then, I founded Global Medical Data, Inc.

BBS:  Are your entrepreneurial characters fiction or non-fiction?

Bob:  They are both.  Examples of actual former slaves, who became entrepreneurs and appear in First Dark, include Hiram Young and Ben Montgomery.

BBS:  What entrepreneurial skills were important to your characters?

Bob:  The novel does not go into entrepreneur capabilities and skills.  In my speeches and seminars, I talk more about certain traits and skills that successful business owners seem to have in common.  I relate some of these to 19th, 20th, and 21st century people – some of whom are in my novels.

BBS:  What are a few of these traits or skills?

Bob:  In speeches and seminars, I go into some depth about seven traits or skills.  A few examples include, interpersonal, creative thinking, and leadership.

BBS:  What are the target audiences for your speeches and seminars?

Bob:  My audiences are primarily university students, our military, and senior high school students.  However, I also accept invitations from conventions, book clubs, and others.

BSS:  When did you first consider yourself a writer?

Bob:  I don’t.  At the beginning of each chapter in every book, I start with the hope that I can write the best scenes I can.

BSS:  Where do you get your ideas for your books?

Bob:  My characters and their antics come from observing people I see day to day.  Then, I transport them to the war or time period that I happen to be writing about.  I have already decided that I will write at least one novel for each major war in which United States’s armed forces have engaged in the period 1860 – 1975.

BSS:  What was your favorite chapter in First Dark to write and why?

Bob:  That would be the single chapter located in the second half of First Dark in which Isaac and main characters James, Ortega, and Alejandra appear – oh, and a ghost.

In this chapter, I reached a major milestone that was set twenty years before when I started First Dark.

BSS:  Why do you feel you had to tell this story?

BSS:  What is your upcoming book about?

Bob:  My next book (untitled) is a sequel to Will and Dena.  Along with Will and Dena, several of the main characters will return – and of course, new characters will emerge.  The plan is to set the next book in the period 1945-1955 to include the Korean War and a part of the Civil Rights struggle in United States.  The scheduled release is in the autumn of 2013.

Meanwhile, I will post progress from time to time in my blog, located in my web site.

BSS:  Bob, thank you for sharing your vision and thoughts with Buffalo Soldier Sentinel readers.

Bob:  Thank you.  It was my pleasure.

First Dark: A Buffalo Soldier’s Story is now available in paperback at Amazon, Barnes & Noble, Books-A-Million, bobrogers.biz, and other booksellers.

An ebook version (pdf) is available now at bobrogers.biz.

First Dark for Kindle, Nook, and availability in the iTunes Store is coming soon.

Original Works by Pat J. Schulz :From her book: Metamorphosis: A Life Journey

Author’s Note Excerpt:   “Growth is not an easy thing – we have growing pains. But, when you come into your knowing, each experience of pain, joy, love and disillusionment can be placed into its proper perspective. What you gain from it all is yours. What you gain is uniquely you …”

A Pedal is Formed

Because he is different

We pretend he does not exist

Society names him an outcast

Yet, his spirit remains in our midst.

His blood flows and flesh is real

Though because of our ignorance

His identity he must conceal.

This man without a face

What a pity he is

To those who lurk and lear.

They know not the man

Nor the knowledge he holds

It is society’s loss

For his riches are sealed untold.

Be careful how you treat a stranger

For within a friend may lie Beyond

the vacancies of those 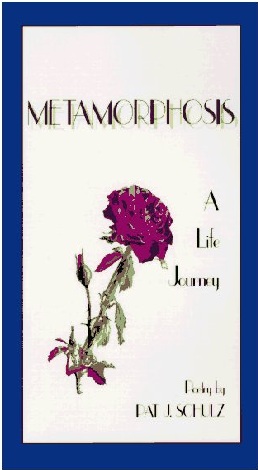 Editor of The Bugle

Newsletter of the Los Angeles, CA Chapter of the Ninth and Tenth (Horse) Cavalry

Letter to the Editor: To whom it may concern: I am writing to let you know that the Buffalo Soldiers have not been forgotten. My son attends a charter school in the Los Angeles area that strongly promotes the learning of African and African-American history. This past October (in place of traditional Halloween celebrations), the school held their annual Fall Festival. As part of the festival, students were encourage to create their own costumes which honored any real person or fictitious character of African and/or African descent. The school was flooded with the likes of Obama, Oprah, Mohammed Ali, Egyptian Kings, Prince, Rosa Parks and so on.

After some research, my son proudly dressed as a “Buffalo Soldier”. We created the costume mostly from thrift store items and items we had at home. He won first place in the costume contest for his grade level. He was so proud.

I am glad he had the chance to pay tribute the brave Buffalo Soldiers.

I have attached a picture of him in his “uniform”. Enjoy!

Letter to the Editor – follow-up Last month I posted a letter from a young mother, Ms. Ramona Partee-Sims, who was very proud of her son, Joshua. The school Joshua attends, the Culture and Language Academy of Success, held a Fall Festival in place of a Halloween celebration. As part of the festival, students were encourage to create their own costumes which honored any real person or fictitious character of African and/or African-American descent. Joshua and his mother sat down and went through history books and other material until Joshua came upon some pictures of Buffalo Soldiers.

Immediately Joshua told his mother, “That’s what I want to go as,” pointing to the pictures of the troopers. To prepare for his role, his mother told me that Joshua watched the movie, Buffalo Soldiers. After hearing his story and seeing the results of his transformation, I felt that I had an obligation, as a member of the Ninth & Tenth (Horse) Cavalry Association, to honor this young man. I contacted the principal of the school, Mr. Andrew Jackson, and told him I would like to make a presentation to Joshua. Mr. Jackson thought it was a great idea. Joshua is in the 3rd grade and I was able to meet with all his classmates.

After giving the class a brief background about the Buffalo Soldiers, I called Joshua to the front of the room and made my presentation. I awarded him a Buffalo Soldier certificate of appreciation, a B u f f a l o S o l d i e r commemorative coin, a Buffalo Soldier Stamp pin and a 10th Cavalry Crest pin. I don’t have to tell you how proud and honored he was to have an adult acknowledge his efforts and it goes without saying that Joshua was the hit of the 3rd grade class. I want to thank Joshua, Ms. Sims, Mr. Jackson, and all the teachers at the Culture and Language Academy of Success. You are all doing an outstanding job. Keep up the good work!!